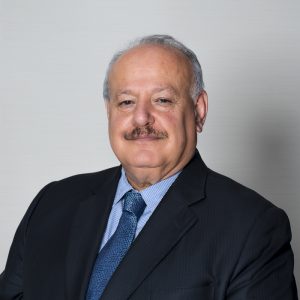 About the Managing Director

Dr. Reyadh Al-Kabban, an Iraqi national, established Al-Kabban & Associates, Advocates and Legal Consultants in 1993, which has since become a name synonymous with success and is well known in the legal circuit. The success of the law firm that specializes in advising commercial companies, insurance companies, banks, government and private clients in their business, investment and other affairs inside and outside the region and its dedication towards offering unparalleled, high quality and culturally sensitive legal services while adhering to the highest standards of integrity and excellence are attributed to the driving force of this establishment.

Dr. Reyadh Al-Kabban obtained his LL.B from Basra University, Iraq (1967-1970), his LL.M (Public Law and Taxation Law) from The University of Cairo, Egypt (1972-1974). Dr. Al-Kabban obtained his Doctorate of Philosophy in Maritime Law from Glasgow University (1983-1985) and has a Diploma in Forensic Medicine (1987-1988). His thesis on “The Effect of Deviation Occurring in the Course of a Maritime Voyage on the Liability of the Carrier” is considered a great piece of literature, which is appreciated, by undergraduates and professors from all around the world.

Dr. Al-Kabban has dedicated more than 42 years of his life to the noble profession and has served as a Lawyer, Legal Consultant, Judge, Arbitrator and Jurist. He was admitted as a lawyer in the year 1971.He worked as an Advocate and Legal Consultant with the Iraqi Oil Company from 1975-1977. He studied at the Judicial Institute of Baghdad, Iraq from 1977-1979. He served as a Judge in the Court of First Instance in Basra, Iraq for 10 years from 1979-1989. He worked as an Advocate with Bujassem & Al Maliki- Advocates & Legal Consultants (Dubai) from 1989-1993. From there he went on to establish his own law firm, Al-Kabban & Associates, Advocates and Legal Consultants. Dr. Al-Kabban is also a member of Transitional Justice in Iraq and the Coordinator of Transparency and Anti-Corruption Committee in a project titled – Future of Iraq. He was a Visiting Research Fellow at the Department of Private Law and the Department of Public, International and European Law, Faculty of Law and Financial Studies, Glasgow University from 1988-1992. He was a Visiting Research Fellow at the Institute of Maritime Law, Southampton University from 1992-1995 and at the Department of Law, School of Oriental and African Studies – University of London from 1995-2003.

As a Legal Practitioner, Dr. Al-Kabban has fought many criminal cases while representing the accused and/or the accuser. He has also represented clients in several civil cases ranging from property, compensation claims, insurance and banking while recovering huge sums of money on behalf of the clients. Dr. Al-Kabban’s strong political background along with his experience as an Advocate and Judge in Iraq has seen him successfully representing clients involved in business deals and disputes linked to Iraq.

Arbitration being a fast growing and a cost effective alternative to litigations, Dr. Al- Kabban has excelled in this versatile area of practice earning him the respect of his colleagues as a just arbitrator and aggressive litigator. He has personally handled well over one hundred arbitration cases in English and Arabic, wherein he has represented parties as a Legal Counsel or presided over cases as an Arbitrator.

“As a leading law firm, we are constantly looking at ways of enhancing and improving on our valuable services, which in effect has transformed us into a preferred and sought after team of legal representatives. Since 1992, we have developed a strong presence within the Dubai legal framework and will continue to do so well into the future”.